Dave Wilson is now recognised as one of the UK’s best contemporary, acoustic songwriters. A great wordsmith, his songs are sometimes challenging, often lyrical, but always poetic and have been widely covered, including “Storm Around Tumbledown” recorded by Vin Garbutt, amongst many others.

Kip Winter has simply one of the best voices in the business, delivering power and emotion in equal measure. In the past she has sung everything from opera to soul and jazz, but is at her best (and happiest) singing folk and blues.

After becoming full-time, professional musicians in 2012, Winter Wilson have gone on to be one of the hardest-working duos on the UK acoustic music scene. Their sixth album “Cutting Free” was selected as one of the Daily Telegraph’s top 10 Folk albums for summer 2014, but it is above all their live performances which have continued to delight audiences across the UK.
Their previous recording ‘Cutting rightly propelled their music towards a
larger audience, and the CD featured in the
Daily Telegraph’s ‘10 Fine Folk Albums For The Summer’ while the entertainments website axs.com
included the twosome in its list of ‘Top 10 Most Underrated Folk Artists’ (alongside the likes of First Aid Kit, Bella Hardy, among others; see www.axs.com/the-10-most-underrated-artists-in-folk-music-65431).

The duo’s brand new, seventh album ‘Ashes & Dust’ builds on those successes. This time, Dave writes all the songs (previously, all but one) – and, again, they are exceptionally good ones. “We think it’s a very relevant album for our times” says Kip. “Last summer, we were discussing the current state of the protest song with Artisan’s Brian Bedford at the Gate to Southwell Festival. Fittingly, this album has a few protest songs. It wasn’t deliberate, but the state of the world we live in just seems to demand protest, whether in song or otherwise. We’ve aimed for it not to sound preachy, but there are some strong messages in there”.

Dave is a prolific songwriter. ”Every time we start recording a new album”, Kip confirms ”we already have a list of songs as long as your arm and yet Dave begins to write more. It must be something about the recording process that sets him off! Of the thirteen songs on Ashes & Dust, eight were written this year.”’To Hell With Monday Morning’ was written on holiday in February, while we were preparing to go out. By the time I’d finished my nails, Dave had written the song! ’Going Back Home’ was simply built round a ukulele riff one afternoon during the recording process
itself. ”’I’d Rather Be Ashes Than Dust’, came from listening to Great Lives, about the author Jack London, on BBC Radio 4, while we were travelling back from a gig. The quote was London’s, in reply to a comment that his lifestyle would burn him out before his time. We genuinely looked at each other and both said “there’s a song!”

”’Gallows Hill’ is based on a location in my home town of Stornoway” she continues. ”Sundays could be pretty bleak when I was a kid, with no playing, singing or reading (except The Bible) allowed in my grandmother’s house. The escape route was a walk up Gallows Hill, to the viewpoint over the town pictured in so many postcards. It’s a beautiful view, but for those hanged there it was their last. The scarf in the song is based on my late Mum’s old headscarf, which still sits in a drawer in our house.”We’re lucky to have a recording set-up at home, which gives us the flexibility to fit recording in amongst what has been a pretty hectic touring schedule. That said, Dave was happy to hand over mixing duties to our good friend Alistair Russell (ex Battlefield Band). Ali’s a very experienced sound engineer and knows our sound inside out, having worked with us at many festivals over recent years, so it was a pleasure to have him on board for ’Ashes & Dust’”.
Since their first collaboration together in the 1990s, as one half of folk-rock outfit Ragtrade, Kip Winter and Dave Wilson have both been recognised as great natural entertainers. Nowadays, their show is enhanced by a superb stage presence, and the ability to really engage with audiences from the festival main stage to the intimate house concert. Whatever the setting, these two provide contemporary acoustic folk music at its very best. 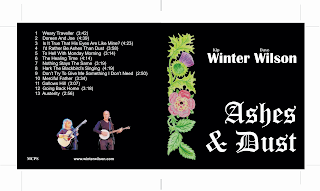 The “Ashes & Dust” tour starts in March and goes on and on and on. They will cover most of the UK as well as dates in Germany, the Netherlands and Ireland.

check out their web site for dates
Dave Wilson
Born & Raised:   Sleaford, Lincolnshire (although he did briefly move next door, to Nottinghamshire!).
Music:   Bought his first (Yamaha) guitar aged 17 and taught himself to play from the David Bowie song book. He started writing songs regularly when he began attending Boston Folk Club in the early 1980s (to make up for not knowing any folk songs) and hasn’t looked back since.
Dave’s songs have been covered by musicians all over the UK and beyond, the best known being Storm Around Tumbledown, which has been recorded by Vin Garbutt and Anthony John Clarke amongst others.
Today Dave plays mainly Martin guitars, plus a handmade Nick Benjamin.
Occasionally he has a “rock god moment”, when he gets the chance to play his Fender Strat.
He also enjoys practising banjo…..loudly… …at home.

Kip Winter
Born:  West Germany (although her family lived in Holland at the time – bad day out!), but fiercely Scottish.
Raised:   Holland, Germany, England, Scotland….also lived in France for a while – a bit of a nomad. But music always featured. Kip learned to sing harmonies on long family car journeys back to the Outer Hebrides every summer. “It was usually a two day journey, in a Morris Minor with no radio, so singing was the natural way to pass the time.”
Music:   Learned piano from age 9. Bought a second-hand flute for Fr400 when living in France in 1980 and has subsequently “pootled” on guitar, tenor guitar, bass, piano accordion and tenor ukulele.
But mainly she loves to sing – anything from classical and jazz to soul, but especially folk and blues.

Influences:
“My Dad – a great singer and musician and I learned so many songs from him.”