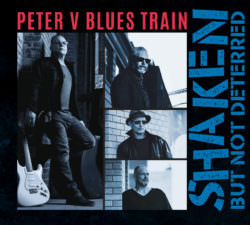 The hard-working, hard-driving contemporary blues band, Peter V Blues Train, has been tearing up the airwaves and the touring routes since their formation in 2013. The veterans of the NY and NJ scene hit us once again with their remarkable second album of 2018 “Shaken But Not Deterred.” The nine original tracks and four fresh covers recorded by Joseph DeMaio at Shorefire Recording Studios, are a sophisticated blend of modern blues with jazz and funk overtones that prove the band means business. The quartet is led by guitar man and vocalist Peter Veteska, aka Peter V, a native of the projects in rough-and-tumble Bushwick, Brooklyn. He is backed by Alex D’Agnese on drums, Sean “Gravey” Graverson on bass and Aron Gornish on keys and joined by a few special friends, including Jeff Levine (B3) and Danny Walsh (sax), to bolster the sound and add fun and fire to an already potent mix.

Drummer Alex D’Agnese introduces the opening track, ‘Don’t Wanna Leave Memphis,’ with a classic shuffle groove that builds to a powerful triplet fill that brings in the band and boldly declares this band knows how to swing and rock steady. Peter V names a few of his heroes from the home of the blues and his love for Beale Street that grew deeper after representing the Jersey Shore Jazz & Blues Foundation at the International Blues Challenge, while sax man Danny Walsh spars with Jeff Levine on the Hammond B3. The crew then rips out a bump and grind arrangement of Fats Domino’s ‘Blue Monday,’ updating the New Orleans standard with a muscular punchy beat and gritty guitar. Written by Peter V and Joanne Cesario, ‘By The River,’ previously released as the opening track on their 2017 album “On Track,” is revisited and refined here by colorful guitar from Bob DelRosso and a sweet remix from DeMaio that brings out the funky groove but still retains the blues underbelly. Peter V drew inspiration for his emotional delivery from soul singer Donny Hathaway for the oft recorded ‘For All We Know,’ added to the lexicon by kicking up the fire and playing the 1934 ballad like a south side dirty blues.

The slinky ‘In Demand,’ is a slow burning hunk of funk that has Peter V begging at the feet of his best girl. Blues standard ‘T Bone Shuffle’ is reinvented as a heavy Chicago shuffle featuring more hot lead guitar and organ solos. D’ Agnese’s heavy bass drum foot and a gritty riff creates a distinctly modern feel on the heady track ‘Alibi,’ before the band delivers some good old-fashioned rock ‘n’ roll for the barnstorming ‘Don’t Cheat On My Lady.’ Peter V lays out his bluesman manifesto declaring “This is who I am, not what I chose to be,” on ‘Rodeo. (No BS),’ and repeating “this is a blues show, not some rodeo,” passionately driving his point home. Gary Neuwirth adds hot blues harp and powerhouse vocalist from the Jersey shore, Vanessa Vause, trades verses with Peter V on the saucy duet ‘Getting Closer Now.’ Paul Levinsky sits in as the funky drummer for the hip-hop influenced east coast blues update ‘Been So Long.’ The title track, ‘Shaken But Not Deterred,’ is a jagged time-shifting blues rocker that has influences from Albert Collins and fellow New York shouter Popa Chubby. The live-in-the-studio acoustic duet of the blues chestnut ‘Worried Life Blues,’ tagged as a “bonus track,” closes out the set as a delicious encore.

This strong second release of 2018, “Shaken But Not Deterred,” will no doubt follow in the footsteps of their third album,“Running Out Of Time,” keeping The Peter V Blues Train high on the charts and is sure to receive glowing reviews while maintaining the bands presence in the vibrant original East Coast blues scene. 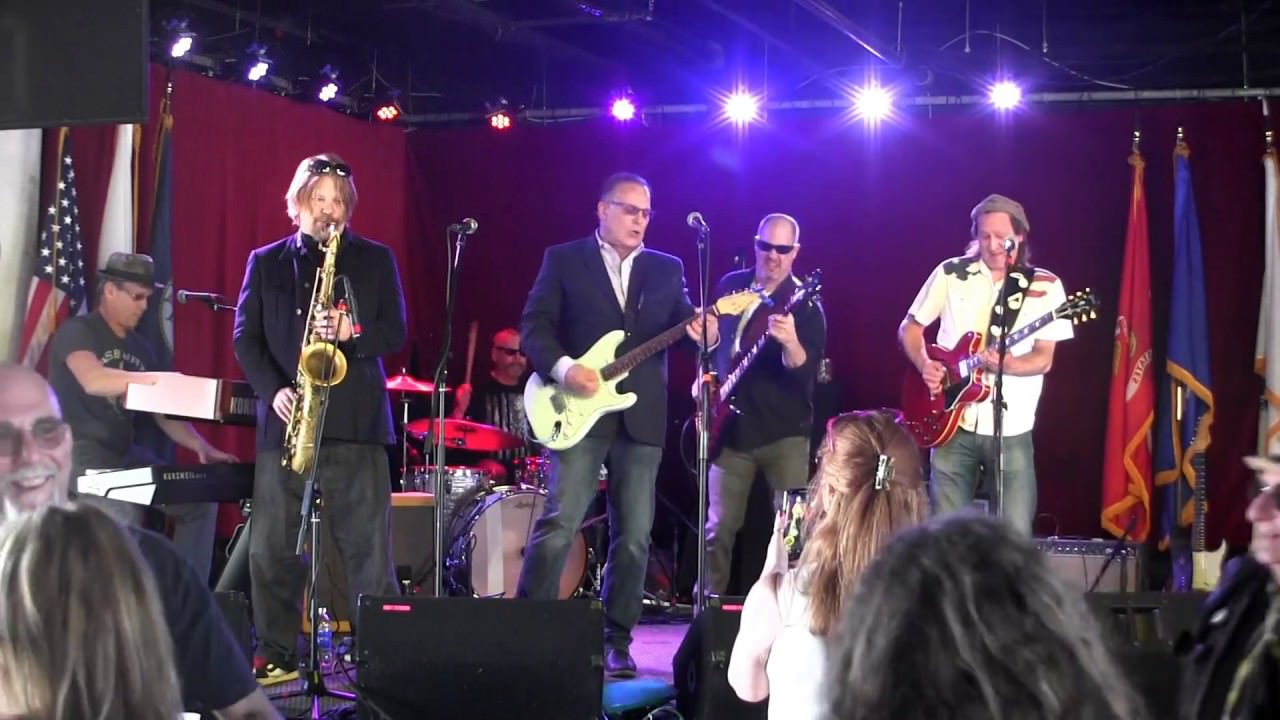 Here’s what Peter V has to say:

“I was born in Manhattan in 1959 and grew up in Jamaica Queens. When I was twelve years old, I saw a black Les Paul in the window of a pawn shop. I got a press route delivering papers on a bike. Each week I would drop off a payment on layaway. After a few months of weekly payments, I was able to pick up the guitar that I had dreamed of. Listening to Derek and the Domino’s and the Allman Brothers I started teaching myself and learning to play my favorite artists. I performed at my first paying gig at the age of 15. For the remainder of my teenage years and adolescence, I played at numerous bars and clubs throughout New York and Long Island. At the age of 21 I was disenchanted with the music scene, and I decided to step away from it. The next twenty-five years, of my life, I only rarely picked up the guitar. My musical taste changed, as I discovered Jazz, and other genres of music. All this music had a very big influence on my musical growth. When the economy tanked in 2008, I reconnected with my lifelong passion of playing the guitar with a renewed vigor.”

“I really got into my “blues” roots. I also discovered many of the blues greats from the 50’s, as well as, new contemporary blues artists such as Robert Cray. I cut my teeth playing various local blues jams. I was the “new kid on the block” yet I was in my early 50’s. I was encouraged to sing, so that I could get up more often, to play at the local jam events. I took that advice and worked on my vocal skills. Today, I have flourished into a solid “blues” guitarist and vocalist, which helped to create the distinctive sound of the Peter V Blues Train. My musical focus is to create a unique sound of blues music which is more upbeat and influenced by jazz and funk. I write and perform original music, as well as, reinterpretations of lesser known blues classics.”