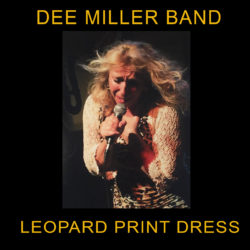 Minneapolis became noted as a center for rhythm and blues (R&B) in the 1980s, when the multi-talented star Prince rose to fame. But the twin-cities region had long been known for giving birth to notable modern folk music, gospel, blues, alt rock and jazz artists. Dee Miller grew up in Saint Paul Minnesota, singing along to her favorite vocalists and was a member of many local bands earning the title “The Duchess of the Blues” from the Minnesota blues community. The self-proclaimed “barrelhouse” singer formed her own band in 2004 and in the fall of 2018 the Minnesota Blues Society inducted Dee Miller into the Minnesota Blues Hall of Fame in the category of “Performer.”

Her sizzling hot band features the vocal lead and harmonies as well as the blazing guitar work of the phenomenal Craig Clark. His rich deep sound is rounded out by the rhythm section of Eric Meyer (bass/vocals), Mike DuBois (drums) and the keyboard work of Jesse Mueller.

Their third album, “Leopard Print Dress,” was recorded at the Villa Studios and features ten tracks – a cross section of house rockin’ blues heavy duty soul and dance party R&B that showcases the muscular abilities of this tight hard-working band. The sharp originals and creative covers reflect the variety of blues, rock, and R&B deep-cuts in the group’s repertoire. Inspired by wild nights in steamy nightclubs the rousing ‘Hot And Sweaty,’ open the set with dance floor filling swing and sizzle. Miller proudly carries the torch for Etta James on the blazing cover of ‘Strongest Weakness,’ with her powerful, deep, earthy voice bridging the gap between R&B and rock ‘n’ roll. John Pinckaers sits in on piano for the gospel-fueled reading on the Eagles’ classic ‘Take It To The Limit.’ Craig Clark shares the lead vocals for the title track ‘Leopard Print Dress,’ which won the Minnesota Blues Hall of Fame award in 2017 for “Best Song.” The four on the floor blues rocker was cowritten with Jimi “Primetime” Smith and features a greasy slide guitar solo that has become Miller’s trademark anthem. The house party really gets rolling for the horn-infused boogie woogie ‘Back In The Saddle,’ then Clark steps up on the soul blues burner ‘Last Two Dollars,’ delivering powerful vocals and a ripping lead on the Jonny Taylor hit that has become a staple of the club scene. Steve “Boom Boom” Vonderharr added his hot blues harp to the bump and grind shuffle ‘I Sing The Blues,’ and Toby Marshall lays down sweet Hammond B3 on the lovely cover of ‘Midnight In Harlem,’ with Dylan Salfer tackling the daunting slide guitar part written by Derrick Trucks over a new double chorus outro.

The Band gets funky on rousing take of Albert Collins classic ‘Black Cat Bone,’ highlighted by groovy keyboard from Jesse Mueller and icepick guitar from Clark. Miller dedicates the album closer ‘Steppin’,’ to all her “girlfriends out there who’ve been done wrong” then preaches the blues the way it is supposed to be; down and dirty, raw and live off the floor. The Dee Miller Band are poised to make some bold impressions and tell the world what the Twin Cities has known for some time; The Duchess and her boys are here to tear the house down.

“It is upbeat, engaging, tight, and extremely, butt shakingly danceable. If you are lookin’ for a REAL GOOD TIME, you have found it in The Dee Miller Band and “Leopard Print Dress.” A highly recommended addition to your collection!” John ‘blueshammer’ Hammer, Blue Monday Monthly 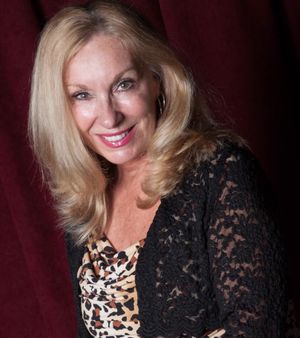 Dee Miller is a Minnesota musician who has a performance pedigree that spans many years on the local and Midwest blues scene. Dee’s “barrelhouse” style of singing has earned her the label “Duchess of the Blues” in the Twin Cities and regionally.

From her early days as a child listening to her mother singing the blues around the house in Maplewood, MN, Dee has been a singer. She first started singing along with Dionne Warwick and Aretha Franklin recordings as she crafted her skills. The sounds of Etta James, Bonnie Raitt, and Mahalia Jackson were part of a life spent singing as she walked down the railroad tracks that were right next door to her house. During these times, Dee realized the power of music and what a refuge it is for her.

Dee’s first professional gig was with the blues band “Minnesota Barking Ducks”. She has also been a member of “Liberty Street”, “Bottom Line”, “Night Train” with her dear friend Liz Cummings, and several others before she started the Dee Miller Band in 2004. Dee has performed in many local music establishments. On a national level, Dee has performed in Chicago at Buddy Guy’s Legends, and in Washington D.C. at Madam’s Organ. Dee has also performed on stages in Memphis, San Francisco, Greenwich Village, Key Largo and Florence, Italy.

During her career she has shared the stage with Koko Taylor, Janiva Magness, Bobby Messano as well as local favorites Lamont Cranston, Annie Mack, Renee Austin, Mick Sterling, and many more incredible musicians. International guitarist Jimi “Primetime” Smith was an integral part of the Dee Miller Band for several years.