Yes folks after much deliberation we have decided on our Album of the Month and what a treat it is, Beatles Blues Blast , 17 of the Liverpudlians great tunes Bluezed up by Gaetano and the boys.

The Fab Four are unquestionably one of the most influential groups of modern times, with over 500 artists recording cover versions or full tribute albums of Beatles’ songs. The list of artists spans the gamut from Ella to Elvis, the Philharmonic to Phish, even The Muppets and Alvin & the Chipmunks have had a go at them. The Beatles themselves began as a cover band, recording songs by 50’s icons Chuck Berry, Little Richard and Carl Perkins and the influence of classic R&B and blues can be heard on all the group’s albums. Several notable R&B stars had hits with Beatles songs, such as Otis Redding, Aretha Franklin and Ray Charles, but only a few authentic blues acts have ventured into the territory of the lads from Liverpool.

Cleveland Ohio is the home of the Rock & Roll Hall of Fame and birthplace of guitarist extraordinaire, Gaetano Letizia, leader of the Underworld Blues Rock Band, who was a teenager during the years of Beatlemania and the British invasion. The effect of those heady days has stayed in the forefront of his mind for decades and now, with a little help from his friends, Mike D’Elia on drums and bass man Lenny Gray, Gaetano presents “Beatles Blues Blast.” The third disc from the trio is a rowdy romp through 17 classics from the Beatles’ catalog, cleverly arranged and reframed as a funky blues jam session. Recorded live off the floor in a single day at Bad Racket Studio in downtown Cleveland, this lo-fi indie blues rock album takes this magical music back to its roughneck roots of dance clubs in a hard-working industrial town. 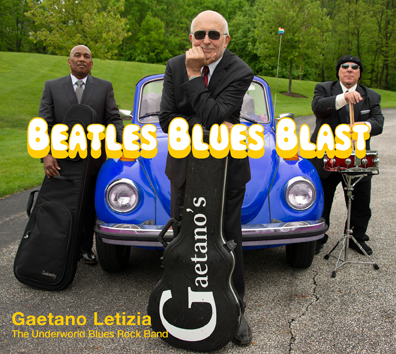 In classic Beatles’ fashion the album begins at the end with ‘Come Together,’ which was the opening song of their final studio album “Abbey Road,” where the trio forgo the dramatic intro and jump headlong into the groove setting up the formula for the project. D’Elia turns McCartney’s first drum track into a jungle beat of swamp rock fury on ‘Do It In The road,’ and then we all yell “More Cowbell!” during the four on the floor funk ‘Drive My Car.’ 1960 Motown hit ‘Money (That’s What I Want)’ is injected with surf guitar as a tip of the hat to the American bands that also covered it. Harrison’s Rocker ‘Taxman’ is given a Texas Shuffle treatment, and his beloved ode to the six string, ‘While My Guitar Gently Weeps,’ shifts between a samba and power ballad. ‘She Came In Through The Bathroom Window,’ retains the funky groove of the Joe Cocker version, and they keep the psychedelic blues rocker, ‘I Want You (She’s So Heavy),’ true to its original metal prototype form. The Latin tinged ‘And I Love Her’ has a 70’s Santana vibe, and ‘Can’t Buy Me Love,’ is turned into a Chicago Blues. Letizia steps hard on the fuzz pedal for ‘You Can’t Do That,’ and plays ‘Yesterday,’ as a soft blues rhumba.

The boys pick up the rooftop party right where the Beatles left off for a rocking ‘Get Back,’ then bring out the full drama for ‘With A Little Help From My Friends.’ The novelty song with a great riff, ‘Birthday,’ is tossed in for laughs before a sweet country blues reading of ‘Blackbird’ that features marvelous finger picking lead guitar and articulate counter point on the bass. The aptly chosen closer ‘A Day In The Life,’ also the final track of the 1967 album “Sgt. Pepper’s Lonely-Hearts Club Band,” is bumped up with touches of Soul and Rockin’ Fire for an epic climax.

By tackling this iconic repertoire, Gaetano Letizia and The Underworld Blues Rock Band, have created a whimsical and yet sincere tribute with “Beatles Blues Blast,” that will find a respected place in the Pantheon of Beatlemania that remains strong some 50 years on. 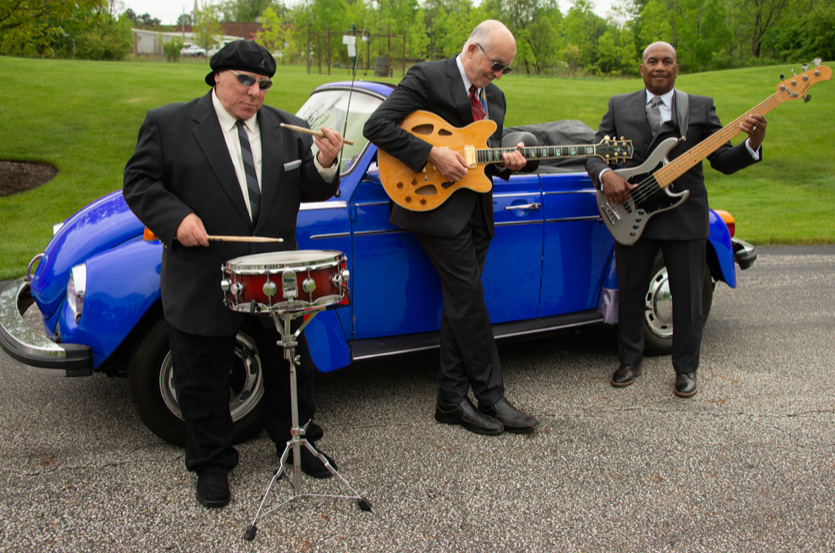 Gaetano, also known as Tom, was born in Cleveland in 1951. He began performing his own blues shows at the age of 16. One of his first stage appearances was with the James Gang, sitting in for Joe Walsh at his Alma Mater, Kent State in 1970. Since then, he’s performed all over the U.S. along with Europe and Asia. Early performances with June Core of Robert Jr. Lockwood’s band, gave Gaetano a strong blues foundation based on B.B. King, Albert King, Muddy Waters and all the great blues patriarchs.

Producer of ten blues and jazz guitar CDs, Gaetano has received stellar reviews in Downbeat, Guitar Player and many national/international publications and his music has been played on radio stations in every state as well as most foreign countries.

The Underworld Band is Gaetano’s blues trio formed in 2010 and now beginning to tour the U.S. with plans for European and Asian tours in the works. The band won the Cleveland Blues Society’s 2014 Memphis Challenge and did four great shows in Memphis. The Underworld Band plays creative blues shows that audiences love and will remember. The band has two excellent albums, “Voodoo Doll & Other Blues Lessons” (2014) and “Resurrection” (2016).

Described as “a guitarist’s guitarist” and a “virtuoso” by music critics, Gaetano’s music stays true to the roots of blues while advancing the standard blues forms to delight the listener. “A new take on the blues” describes Gaetano’s treatment of modern blues problems in our lives now that we’re far from sharecropping in Mississippi. With blazing electric solos, red hot slide playing and nylon string guitar, listeners will be treated to a fun style of blues rock combined with funk and R&B that grooves and makes you move. The guitar playing is top shelf and the performances are high energy, audience oriented fun.

Born in Canton, Ohio in 1953, Mike started playing drums professionally at the age of 8 and toured nationally with various groups in his teens. Mike is the “go to” drummer for almost all the Cleveland based groups not only because he is a dynamic vocalist, but because he is a great drummer whose powerful groove and solos drive audiences wild. Known affectionately as “Daddy Sweet Roll”, Mike is loved by his thousands of music fans and everyone who meets this great lifetime blues rock musician.

A Cleveland native born in 1950, Lenny started playing drums at 10 years old and switched to bass to play in R&B bands in 1966. Nephew of Slide Hampton, Lenny’s family is loaded with professional musicians, family reunions are big jam sessions. Lenny’s style is based in blues and jazz, heavy on the groove side. A Victor Wooten student and disciple, Lenny pops with the best and swings with all the rest.