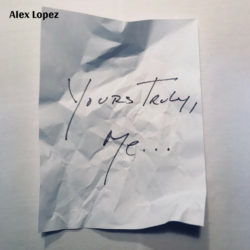 Tampa based singer/songwriter Alex Lopez explains the meaning behind the title of his fourth album, “Yours Truly, Me,” as “a simple collection of songs, no theme or concept, except to create the best music possible.” The guitarist grew up in the rock ‘n’ roll heartland of Cleveland Ohio and settled in Florida after college, where he has honed his skills as an entertainer, soaking up all the influences that meld together in the sunshine state from Latin to Southern Rock, smooth jazz and R&B. Backed by his touring band, The Xpress, featuring Kenny Hoye on keyboards, Steve Roberts on bass and drummer David Nunez, Lopez moves easily from British blues to soul and jazzy pop, on eleven original tracks and an inspired cover of a Texas blues rock classic.

The opening track, ‘Woe Is Me,’ introduces us to the gritty tenor vocals and expressive guitar work from Lopez on a tale of tough love that starts out with a shifting current but ends on smooth sailing guitar outro. Next up the band reinvents a ZZ Top standard ‘Tush,’ as a sophisticated urban blues, swapping the shuffle for a modern funk rock groove peppered with hot Hammond B3. Lopez then picks up an acoustic to bring in the first of what he tags as redux tracks that have been reworked from a previous recording, delivering ‘Take Me Back Home’ as an easy-going blues. The tempo jumps up for the pumping rocker ‘I’m A Working Man,’ and a hot go-go beat opens the Motown inspired ‘I’m A Losing It’ that is nicely spiced up by hot horn hits from Carlos Ortiz and Jule Boyer. Lopez gets passionate for the emotional ballad ‘I Love You Blues,’ featuring fine piano work from Hoye. Lopez channels Richie Valens on the Chicano rock ‘n’ roll boogie ‘I Can’t Stop,’ then his guitar channels Eric Clapton on the sentimental ‘I Will Miss You.’

The lovely acoustic sonnet, ‘Chase My Blues Away,’ is slipped into the set for a quick palette cleanser before Lopez and crew play out the Latin pop fused ‘All I Really Want Is You.’ Special guest Elle Carr joins Lopez for the duet ‘Sinful,’ bringing her sultry alto from Somerset to the project, perfectly playing the foil to Lopez on the sizzling tango that should prove to be the highlight of the album. The horn section joins in again on ‘Cheating Blues,’ adding spice and fire to the Chicano rock party finale.

Alex Lopez and The Xpress have much to be proud of on this strong fourth release, “Yours Truly, Me,” taking another bold step forward on their mission to make a positive impact on people’s lives through their music. 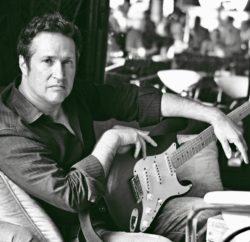 Alex Lopez is an acclaimed songwriter/guitarist and musical artist quickly taking the blues/rock scene by storm. Alex was born in the heartland of rock ‘n’ roll Cleveland Ohio and started playing keyboards before becoming inspired by British blues/rock bands to master the guitar. Influenced by greats like Eric Clapton, Jimmy Page and Jimi Hendrix, Alex spent his young adulthood performing in clubs and recording/producing his original songs in studios while polishing his songwriting skills. After his move to Florida to attend college and then taking some time to raise a family, Alex spent years as the vocalist and lead guitarist of the wildly popular rock band Reminiscion before striking out on his own.

In September of 2013 Alex released the album “Back Bedroom Blues” a collection of all original blues and blues/rock songs displaying his formidable skills as a blues guitarist and singer/songwriter. And in 2015 Alex Lopez released his second CD “Is It A Lie” to excellent reviews.

With his third album “Slowdown”, Alex achieved a new level of success, international recognition and critical acclaim. The album appeared on blues, jam and Americana charts received worldwide airplay and earned Alex fans across the globe.

Alex continues to perform throughout Florida with his talented band, The Xpress, and at concerts and festivals throughout the Southeast and is preparing to tour the US. With the release of his upcoming fourth album “Yours Truly, Me,” Alex is sure to continue his ascent in the blues rock world.