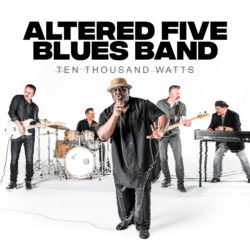 The bad boys from Milwaukee, Altered Five Blues Band, are back, bringing all the blues power they could generate in their fifth album “Ten Thousand Watts.” The supercharged blues party is sure to satisfy the needs of all dedicated fans worldwide. The stalwart quintet, led by steamroller vocalist Jeff Taylor and live wire guitarist Jeff Schroedl, reunited with Grammy winning producer Tom Hambridge in Nashville at Ocean Way Studios in the spring of 2019. Hambridge, producer extraordinaire with the Midas touch, brings out the absolute best performances from the band. The rhythm section of Mark Solveson on bass, Ray Tevich on keys and drummer Alan Arber are transformed into a wrecking crew of blues might, delivering the goods on 12 original tunes full of contagious hooks and infectious grooves that will tantalize your ears and supercharge your soul.

The band invited Steve Cohen to join them on the opening track ‘Right On, Right On,’ adding some high voltage blues harp to the full tilt boogie call to arms. The fellas then get down to business with Schroedl dropping a gritty riff leading into a tale of tough love on ‘To Mad To Make Up.’ The muscular title track ‘Ten Thousand Watts’ has Taylor detailing his abundant powers of seduction and satisfaction, followed by playing the humble fool on the rollicking ‘Mischief Man.’ The spunky Chicago shuffle ‘Great Minds Drink Alike’ celebrates good times with a good woman at your favorite dance hall on a Friday night.

JT and the crew then slow the tempo to pontificate on their love for the music that inspires them on the sentimental ‘Don’t Rock My Blues’ that features guitar work reminiscent of B.B. King. Arber fuses together a rhumba with the second line on the New Orleans flavored ‘Sweet Marie,’ with Tevich tossing in some convincing Professor Longhair piano. Taylor digs deep on the emotional blues torch song ‘Dollars & Demons,’ then plays the role of a man done wrong on ‘I Hate To Leave You (With A 6-Pack In The Fridge).’

The swampy ‘Let Me Do The Wrong Thing’ is a satirical turn of phrase about wanting to bust out of the mold and taste some forbidden fruit. Another swinging boogaloo beat from Arber sets the table for Taylor to preach and Schroedl to do some clever finger picking on the electrifying tune ‘Half Of Nothing,’ before Cohen and his blues harp rejoins the band to bid us farewell on the dynamic closer ‘Let Me Be Gone.’

A 10,000-watt generator can give you enough power to run large appliances during a power outage. The Altered Five Blues Band live up to that pronouncement by coming to our rescue and lighting up the night with this electrostatic collection of high voltage blues, rock and soul. 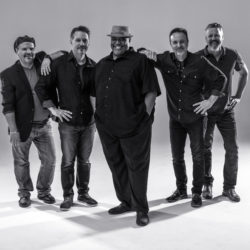 For 17 years, Altered Five Blues Band has been winning audiences with a swaggering stomp of bruising, barrelhouse grit. According to DownBeat, frontman Jeff Taylor “sings powerfully” and “Jeff Schroedl’s live-wire guitar reaches the high bar of mixed invention and fluidity.” Blues Bytes declares the group features “the funkiest rhythm section outside of Memphis.”

From day one, Altered Five dared to be different. The quintet formed in 2002 and earned a reputation for its inventive arrangements and distinctive sound. Isthmus magazine called the band “a rising blues unit” and OnMilwaukee.com declared, “The group delivers the element of surprise.” Within a few years, A5 caught the ear of Cold Wind Records and, in 2008, signed a recording contract with the Minneapolis blues label. The debut album featured the band’s penchant for putting an earthy spin on numbers; the aptly titled “Bluesified” included roadhouse versions of ten popular songs. The group performed live on three television morning shows and honed its sound playing regular club, festival, and concert dates.

In the ensuing years, A5 turned its attention to recording and performing its own material, and the 2012 release of “Gotta Earn It” drew rave reviews. The band’s third album, entitled “Cryin’ Mercy,” delivered the next chapter in A5’s musical odyssey. The album earned the band two Blues Blast Award nominations and five WAMI Award nominations, including Artist of the Year, Album of the Year, and Song of the Year for ‘Find My Wings’, which also made it to the finals of the International Songwriting Competition. “Cryin’ Mercy” reached #3 in the iTunes blues store, made #1 on the Roots Music Report blues album chart, and won “Best Self-Produced CD” at the 2015 International Blues Challenge. The band was also named “Blues Artist of the Year” at the 2014 WAMI Award Show.

The band’s fourth album, “Charmed & Dangerous,” scored a 2018 Blues Music Award nomination for Best Emerging Artist Album and Song of the Year at both the Independent Music Awards and Wisconsin Music Awards in 2018. It reached the Top 5 in the iTunes blues store and hit #1 on the Roots Music Report Blues Album Chart. Guitar World magazine called the song ‘Charmed & Dangerous’ a “menacing, swampy blues,” and the track has been in regular rotation on SiriusXM’s Bluesville along with many other programs and playlists.